The Fashion World of Jean Paul Gaultier: From Sidewalk to Catwalk

You’ve still got a little time to make it to the Brooklyn Museum to see The Fashion World of Jean Paul Gaultier: From Sidewalk to Catwalk, where its running until February 23. It is a phenomenal exhibit, I saw it at the Dallas Museum of Art in January 2012. Showcasing the span of Gaultier’s work, it is a wonderful journey through the designer’s mind. This is in part because the clothing, films and concept art are not shown in chronological order, but are instead divided into areas that each have its own mood, aesthetic and tell a specific story. You don’t just look at the work, you are immersed into the experience. This is also greatly aided by the very technologically cool and slightly creepy mannequins that the clothes are displayed on, which have projected faces that move and talk. They not only talk, but sing like weird siren-goddesses and fix their stares on you. Its amazing.

I was so excited to be able to attend the exhibit, Jean Paul Gaultier being my absolute favorite designer. Sure, I adore his iconic sailor look, and who doesn’t love those Madonna cone bras? But it was Gaultier’s work for the film The Fifth Element, along with his Fall 1993 collection inspired by Jewish Orthodox clothing that really won me over. By the time his absolutely stunning Russian folk inspired 2005 Fall collection came out, and then his Fall 2010 Ready to Wear collection, with its melting pot, journey around the world feel, I was completely sold and completely in love. Gaultier walks a perfect line between approaching these subjects with reverence and a sense of humor, all without ever compromising the beauty of the work or the strength of his vision. It is his blending of what existed centuries ago with the high-tech and futuristic that grounds his work and keeps all of his inspirations magically contained.

Now admittedly, I love fashion. I truly do. From haute couture to street. Historical to trendy. Cinematic costumed drama to minimalist utilitarian design. My love runs deep and wide. However, I don’t think you have to even like fashion to appreciate the beauty, innovation and workmanship of Gaultier’s work. Just standing near one of his intricately detailed gowns and getting lost in it visually is a wonderful experience. And the exhibit itself is well worth seeing.

Here are a few photos I surreptitiously snapped with my phone: 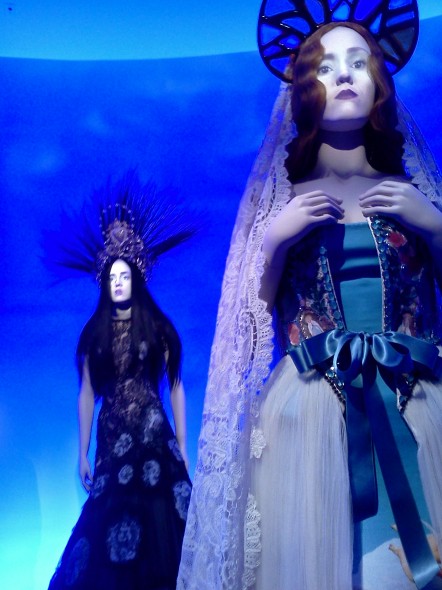 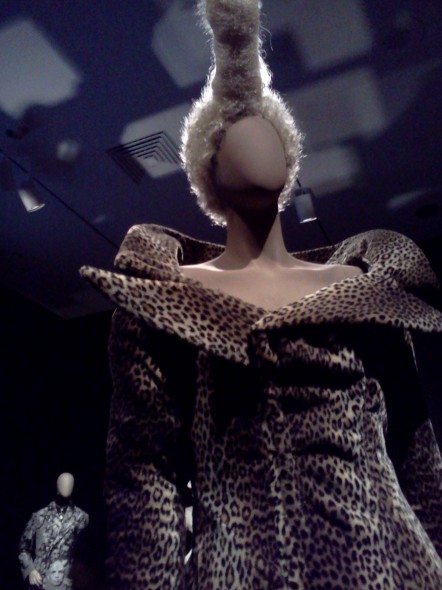 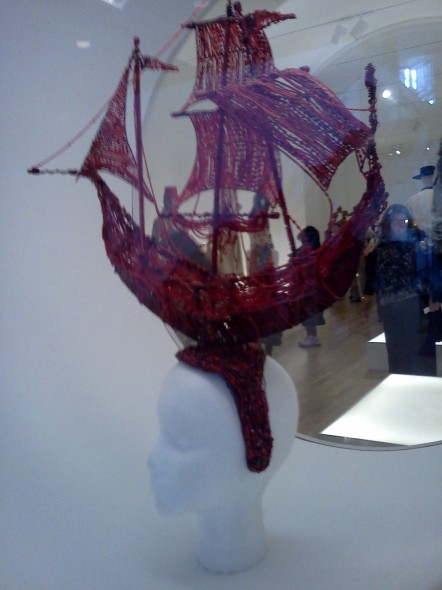 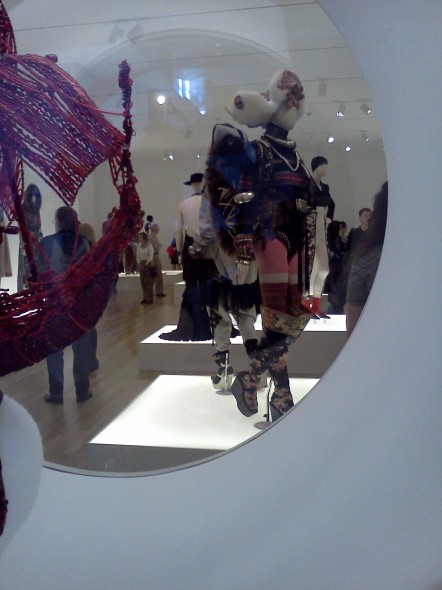 and several more that others took, probably less clandestinely: 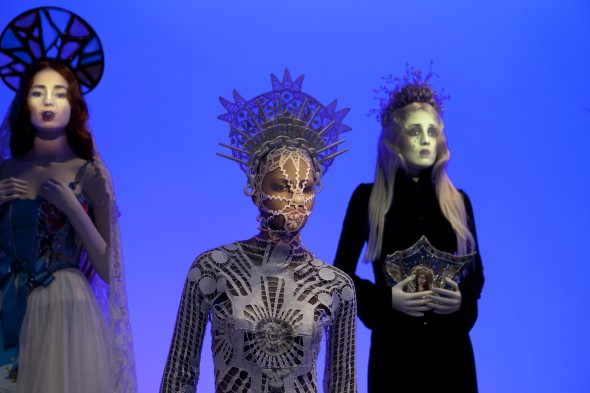 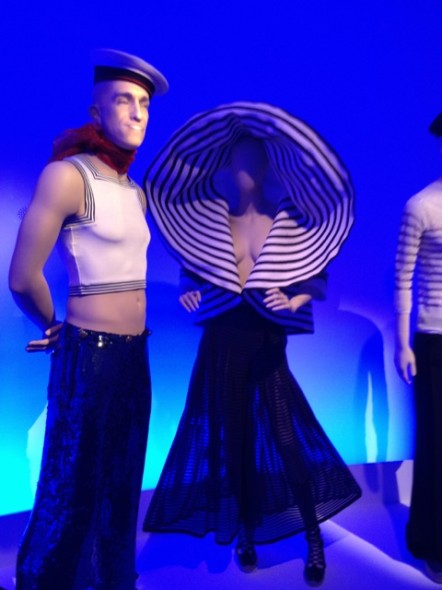 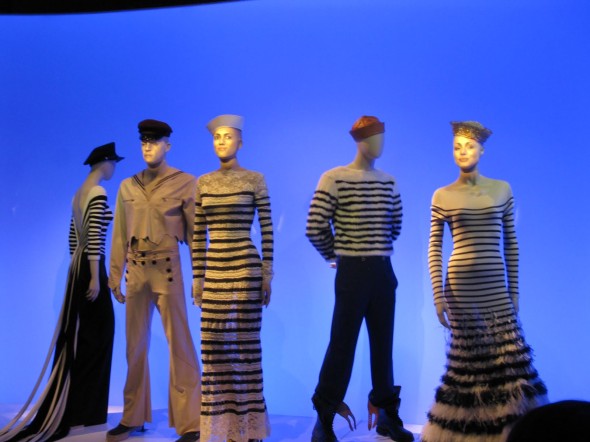 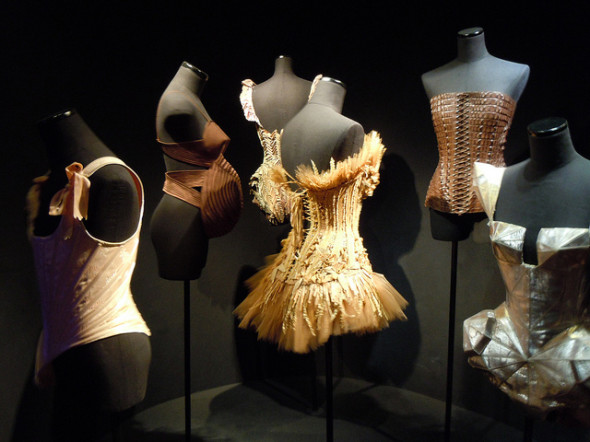 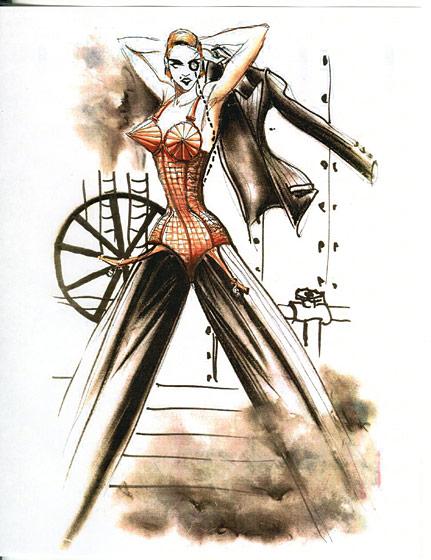 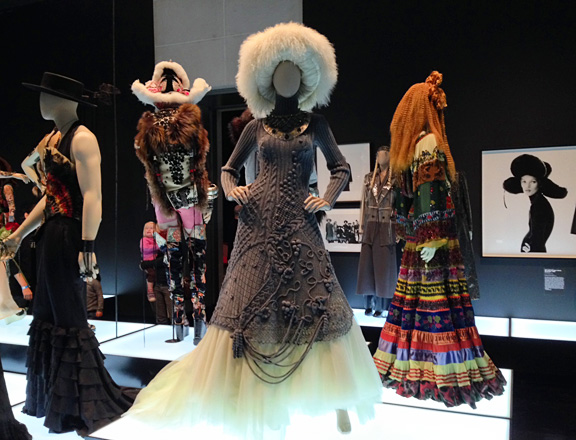 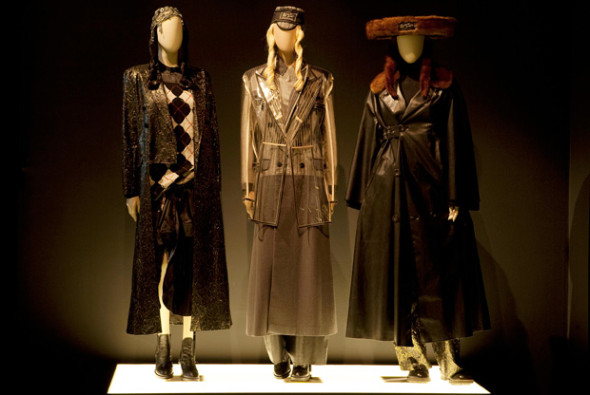 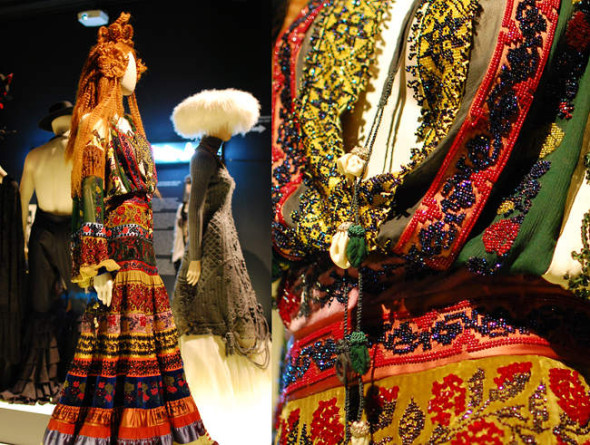 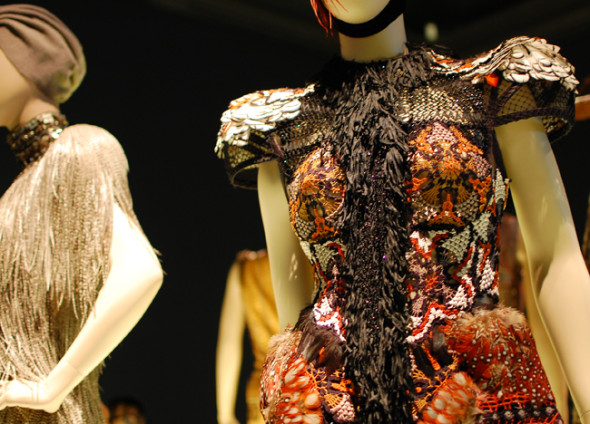 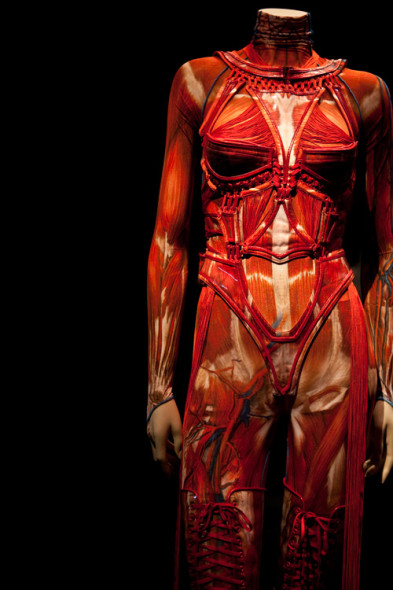 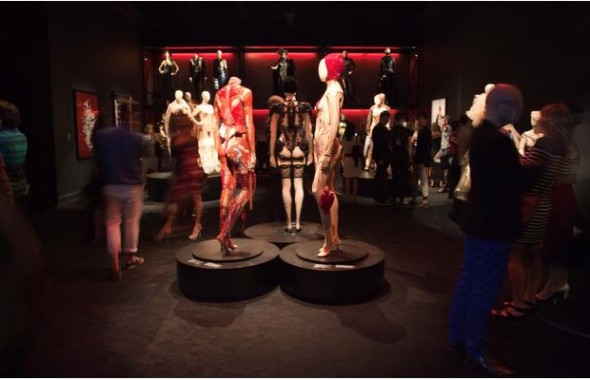 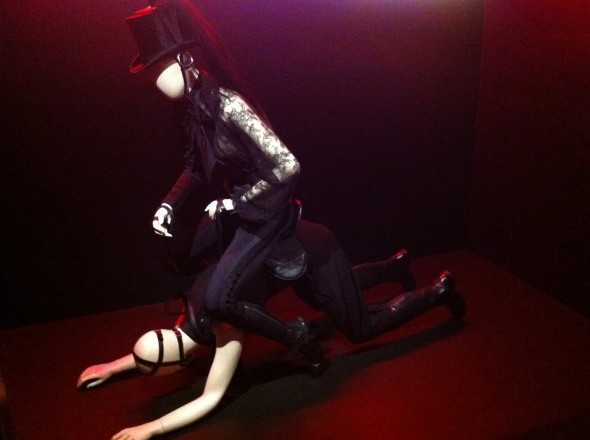 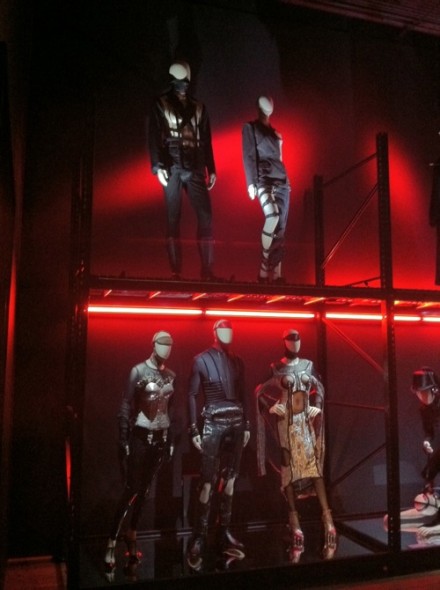 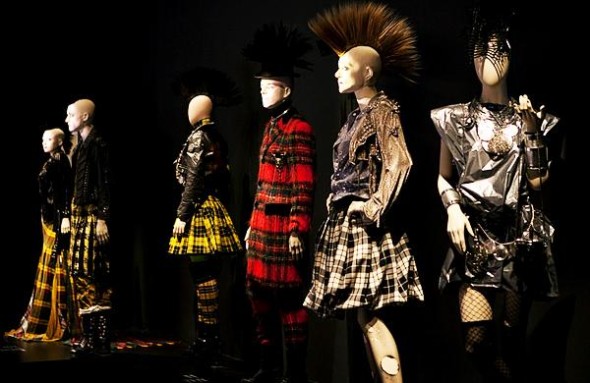 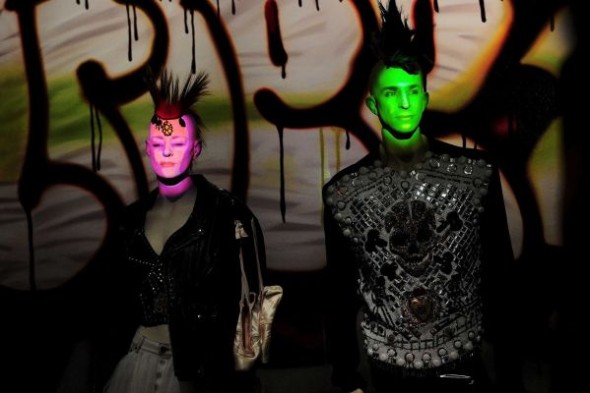 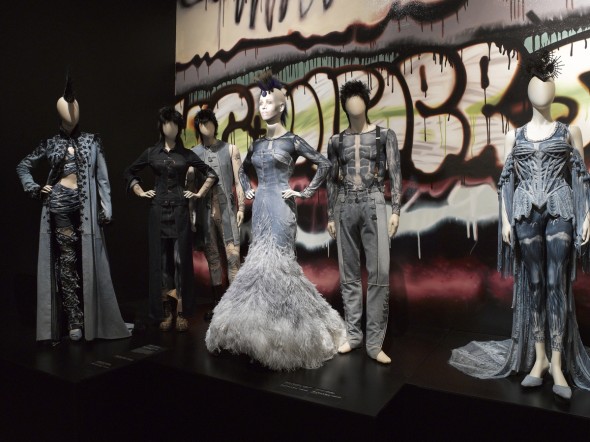 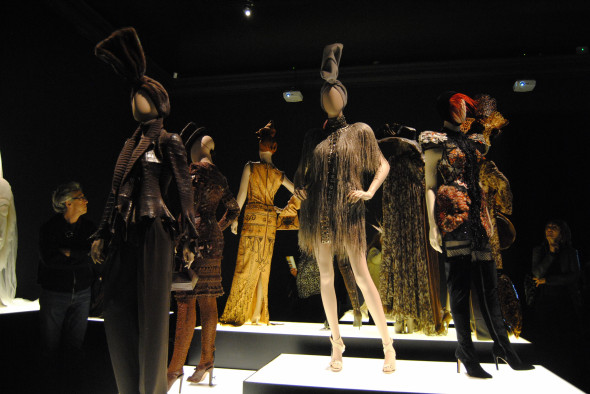 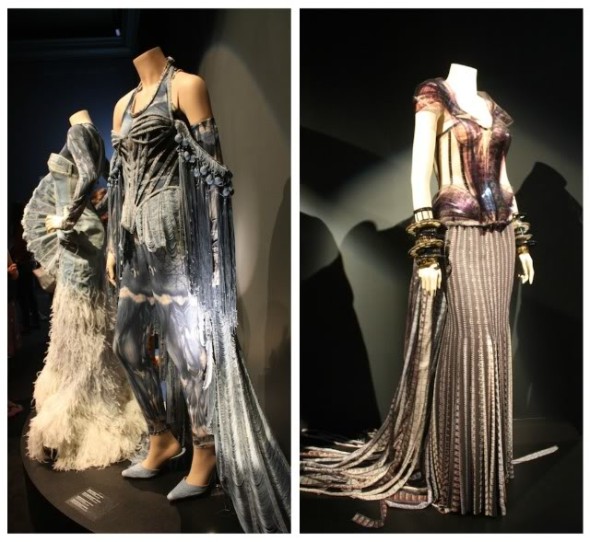 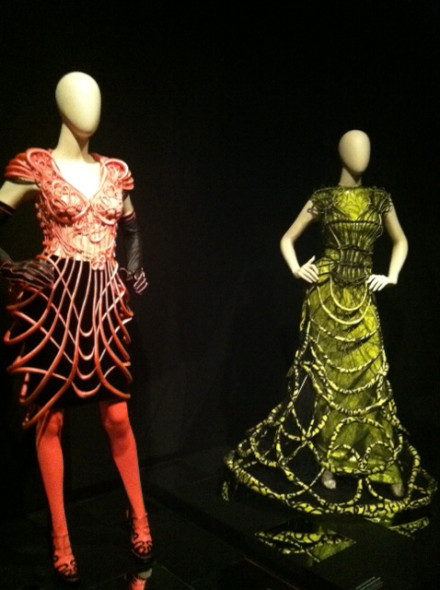 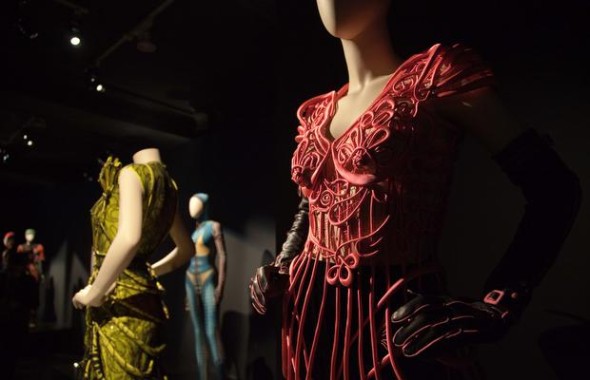 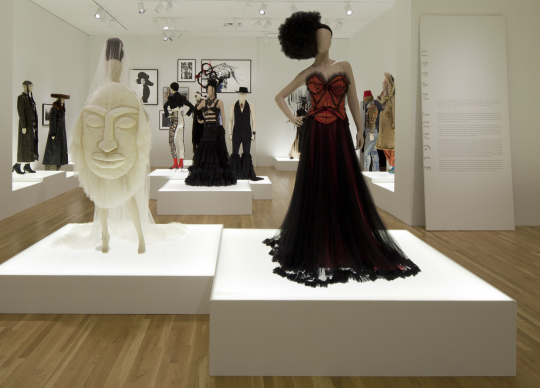 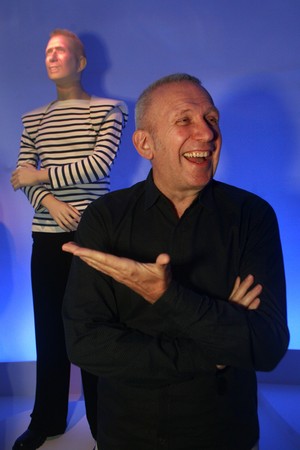